St Bartholomew the Less - The Worshipful Company of Parish Clerks 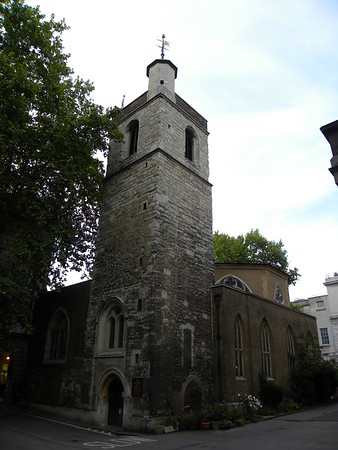 • St Bartholomew-the-Less is the official church of St Barts Hospital and is located within the hospital grounds. The present church is the latest in a series of churches and chapels associated with the hospital over the past 800 years.

• Its earliest predecessor, known as the Chapel of the Holy Cross, was founded nearby in 1123 before moving to the present site in 1184. Along with most other religious foundations the hospital was dissolved by Henry VIII. It was then re-founded by the king, and the chapel became a parish church for those living within its precincts. Its suffix, ‘the Less’, was given to distinguish it from its much larger neighbour, St Bartholomew the Great.

• The church's tower and west end are 15th century, with two of its three bells dating from 1380 and 1420. They hang within an original medieval bell frame, believed to be the oldest in the City of London. In 1793 George Dance the Younger created a new octagonal interior within the shell of the medieval church, its clerestory rising above the old walls.

• The new construction was made entirely of wood, and soon became affected by dry rot. In 1823 it was replaced under the supervision of Thomas Hardwick, who replicated the timber construction in stone with an iron ceiling.

• The church suffered some bomb damage during the Blitz of World War II but this was repaired and the church reopened by 1951. St Bartholomew's interior is small but light and airy, chiefly due to Dance's use of high lunette windows. Its form is that of an octagonal Gothic vault fitted into a square by the means of adding open triangular chapels in the corners.

• Some notable people associated with the church are Inigo Jones who was baptised there in 1673, John Lyly the playwright who was buried in 1606 and Thomas Bodley, founder of the Bodlian Library who was buried in 1613. The church was designated a Grade II listed building on 4 January 1950.