St Botolph without Bishopsgate - The Worshipful Company of Parish Clerks 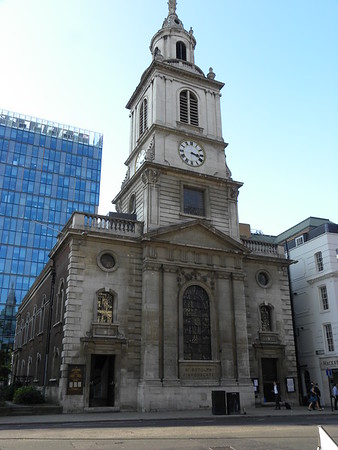 • St Botolph-without-Bishopsgate is first mentioned in 1212. It survived the Great Fire in 1666 and was rebuilt in 1724-9. In the Middle Ages the site was just outside the city walls near the "Bishop's Gate" after which the street is named.

• St Botolph was a patron saint of travellers, so it was an appropriate dedication for a church near a city gate. There were three other churches of St Botolph in medieval London, at Billinsgate, Aldgate and Aldersgate.

• Adjoining the buildings is a substantial churchyard running along the back of Wormwood Street, the former course of London Wall. Christian worship on this site may have Roman origins, though this cannot be fully substantiated. Stow, writing in 1598 only describes the church of his time as standing "in a fair churchyard, adjoining to the town ditch. It narrowly escaped the Great Fire, the sexton's house having been partly demolished to stop the spread of the flames.

• In 1710, the parishioners petitioned parliament for permission to rebuild the church on another site, but nothing was done. In 1723 the church was found to be irreparable and the parishioners petitioned again. Having obtained an act of Parliament, they set up a temporary building in the churchyard, and began to rebuild the church. The first stone was laid in 1725, and the new building was consecrated in 1728, though not completed until the next year. • During construction, the foundations of the original Anglo-Saxon church were discovered.

• To provide a striking frontage towards Bishopsgate, the architect placed the tower at the east end, its ground floor, with a pediment on the exterior, forming the chancel. The east end and tower are faced with stone, while the rest of the church is brick, with stone dressings.

• The church was designated a Grade II listed building on 4 January 1950. • The infant son of the playwright Ben Jonson is buried in the churchyard, and baptisms in this church include Edward Alleyn in 1566 and John Keats (in the present font) in 1795.

• Within the churchyard, the church hall is the Grade II,  It is a single storied classical red brick and Portland Stone building, with niches containing painted figures of Coade Stone charity children.