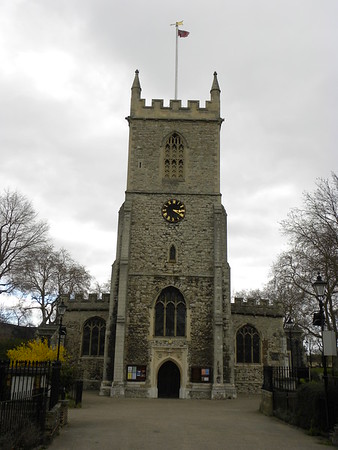 • St Dunstan's, Stepney stands on a site which has been used for worship for over a thousand years. It is located in Stepney High Street. In about AD 952 the Bishop of London who was also the Lord of the Manor of Stepney replaced the existing wooden structure with a stone church dedicated to All the Saints. In 1029, when Dunstan was canonised, the church was rededicated to St Dunstan and All the Saints, a dedication it has retained.

• Up until the early 14th century the church served the whole of Middlesex. Then new churches were built at Whitechapel and Bow. The existing building is the third on the site and was built of Kentish ragstone mainly in the 15th century, although the chancel dates from 200 years earlier. A porch and octagonal parish room were added in 1872.

• The ring of ten bells, the heaviest weighing 28.3cwt, which hang in the belfry were cast at the local Whitechapel Foundry. The seven oldest bells were recast by Thomas Mears and Son, Whitechapel, in 1806. Three were recast in 1952 when repairs were made to the tower. The bells are mentioned in the nursery rhyme Oranges and Lemons "When will that be, say the bells of Stepney".

• The church is surrounded by a churchyard of nearly seven acres. In the 17th century the churchyard was enlarged to cope with the massive number of deaths during the Great Plague. In one eighteen month period 6,583 died, with 154 being buried in one day in September 1665.

• The church has a long traditional link with the sea and many sailors were buried here. It was once known as the 'Church of the High Seas'. The graveyard is also where Roger Crab the 17th-century hermit is buried after living on a diet solely of herbs, roots, leaves, grass and water.