St John the Evangelist - The Worshipful Company of Parish Clerks 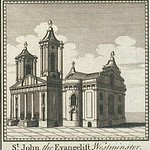 • St John the Evangelist Friday Street was one of 86 churches destroyed by the Great Fire in September 1666. In 1670 a Rebuilding Act was passed and a committee set up under the stewardship of Sir Christopher Wren to decide which would be rebuilt. Fifty-one were chosen, but St John the Evangelist Friday Street in Bread Street Ward was one of the minority never to be rebuilt, perhaps because it was the smallest church within even this area of very small parishes.

• Most of the medieval parishioners were fishmongers who had premises in Friday Street, that being the day of the fish markets.

• The church was one of thirteen ‘peculiars’ in the City belonging to the Archbishop of Canterbury and seems to have originally been dedicated to a Saxon princess, St Werburga. • It was one of the smallest parishes, only four fifths of an acre, and it is unique amongst City parishes in not registering a single death during the Great Plague. Following the fire it was united to All Hallows Bread Street.

• In the early 1620s a debate was held in St John Evangelist Church between the pastor, the Reverend George Walker and some Roman Catholics. The pastor argued that the Church of England was the "true church" and that the Church of Rome was "the whore of Babylon." The Catholic priests replied that "...you Protestants in England have no Church nor Faith." The Reverend Walker published many sermons and books setting forth his Puritan views, Archbishop Laud described him as a “disorderly and peevish man”! 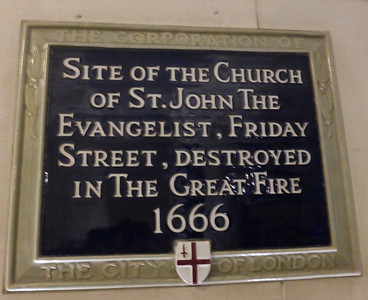