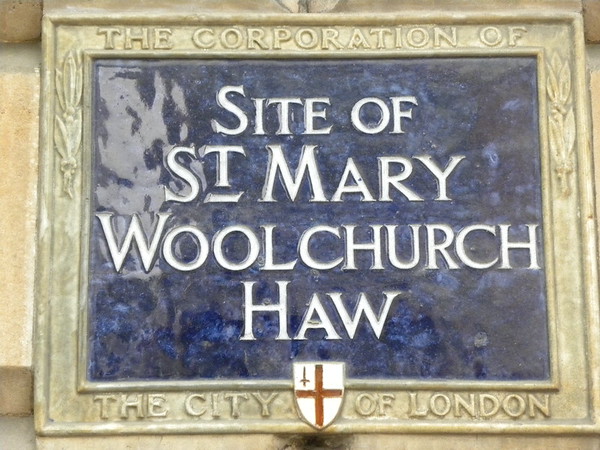 • The church of St Mary Woolchurch Haw was an ancient foundation, dating from the time of William I, when it was given to the Abbot and Convent of St John's, Colchester. It became the property of the crown after the dissolution.

• The name is said to be derived from that a beam that was once fixed in the churchyard, which was used for weighing wool. The church was rebuilt in the reign of Henry VI. At the end of the sixteenth century John Stow described it as "reasonably fair and large" and John Strype recorded that it was "richly repaired and beautified, at the Charge of the Parishioners" in 1629.

• The site was at first an open market until the Mansion House was built in 1737. When the foundations were being dug a stone was found bearing a concentration cross and the name of John Sturgeon, a distinguished citizen of the fifteenth century when the church was re-consecrated.