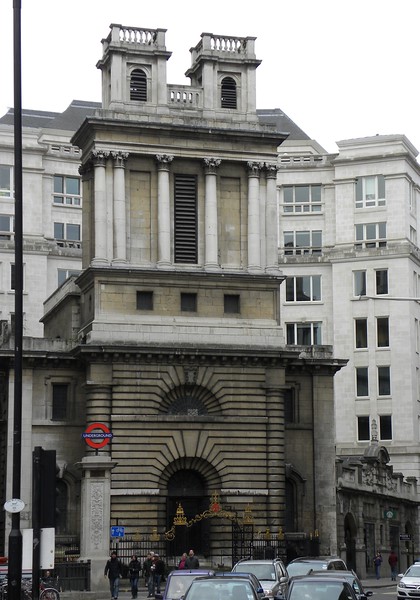 • St. Mary Woolnoth was designed by Nicholas Hawksmoor and is located on the corner of Lombard Street and King William Street near the Bank of England. The church's site has been used for worship for at least 2,000 years; traces of Roman and pagan religious buildings have been discovered under the foundations of the present church, along with the remains of an Anglo-Saxon wooden structure.

• Its name is first recorded in 1191 as Wilnotmaricherche. It is believed that the name "Woolnoth" refers to a benefactor, possibly one Wulnoth de Walebrok who is known to have lived in the area earlier in the 12th century. Its full dedication is to St. Mary Woolnoth of the Nativity.

• The present building is at least the third church on the site. The Norman church survived until 1445, when it was rebuilt, with a spire added in 1485. It was badly damaged in 1666 in the Great Fire but was repaired by Sir Christopher Wren. Two new bells (the treble and the tenor) were cast in 1670, and in 1672 the middle bell was cast. The patched-up structure proved unsafe, however, and had to be demolished in 1711.

• The church was rebuilt by the Commission for Building Fifty New Churches. The new church was completed in 1716, commissioned from Nicholas Hawksmoor, who had responded with one of his most distinctive and original designs. He benefited greatly from having an unusually open area in which to work. The old church had been hemmed in by shops and houses, like many other City churches, but these were demolished at the same time as the church. Hawksmoor was thus able to fully exploit the unobstructed front of the site.

• The building was something of an architectural statement on Hawksmoor's part. Its unusually imposing façade, in English Baroque style, is dominated by two flat-topped turrets supported by columns of the Corinthian order, which are used throughout the church. The west side of the façade, facing Lombard Street, has distinctive recesses bearing an inset forward-curving pediment resting on skewed columns.

• The interior of the church is surprisingly spacious, despite its relatively small size. The layout is typical Hawksmoor, forming a "cube within a cube"- a square enclosed by three rows of four columns which is itself enclosed by a wider square. It is dominated by a baroque baldaquin, modelled on that of Bernini in St. Peter's Basilica in Rome.

• The church underwent major changes in the late 19th century and the turn of the 20th century; it was proposed for demolition on several occasions but was saved each time. Its galleries were removed by William Butterfield in 1876, who thought they were unsafe, and a number of other significant changes were made at the same time.

• Between 1897 and 1900 the City & South London Railway (C&SLR) built Bank tube station beneath the church. The C&SLR were given permission to demolish the building, but public outcry forced them to reconsider: the company undertook to use only the subsoil instead. The crypt was sold to the railway and the bones were removed for reburial at Ilford. The walls and internal columns of the church were then supported on steel girders while the lift shafts and staircase shaft for Bank station were built directly beneath the church floor.

• At this time, the bells were also rehung with new fittings. No cracks formed in the plasterwork, and no settlement of the structure occurred; the company later claimed that the edifice of the church was considerably stronger than before.

• The church was designated a Grade I listed building on 4 January 1950.