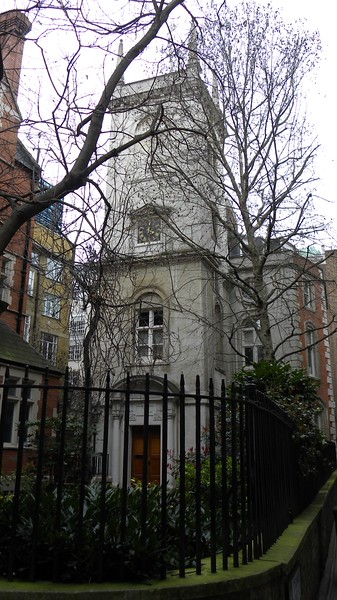 • The church was dedicated to the 11th century patron saint of Norway, St Olaf. Old Jewry was the precinct of medieval London largely occupied and populated by Jews until their expulsion in 1290. The church is also recorded as St Olave in Colechirchlane and St Olave, Upwell, the latter appellation coming from a well under the east end of the church.

• The earliest surviving reference is in a manuscript of c.1130, but excavations made during 1985 uncovered the foundations of a Saxon predecessor, built between the 9th and 11th centuries, from Kentish ragstone and recycled Roman bricks.

• After the church’s destruction in the Great Fire, the parish was united with that of St Martin Pomeroy, a tiny church that already shared the small churchyard of St Olave Old Jewry. The two pre-Fire churches were nearly adjacent. • Rebuilding began in 1671 and was completed in 1679.

• The Lord Mayor, and publisher, John Boydell was buried in the church in 1804. Boydell would visit the church pump (built atop the medieval well) at 5 am each morning, place his periwig on top and douse his head from the spout. His monument survives, transplanted to St Margaret Lothbury.

• Despite being restored in 1879, the body of the church was demolished in 1887 under the Union of Benefices Act ,the parish combined with that of St Margaret Lothbury and the furnishings dispersed to several other churches.

• The tower, west wall and part of the north wall were kept and incorporated into a new building which included a rectory for St Margaret Lothbury. This was replaced in 1986 by an office building and the churchyard survives as the courtyard.

• The 27 m tower is the only one built by Wren’s office that is battered, i.e. is slightly wider at the bottom than the top. On top of the tower is a simple parapet with tall obelisks on each corner with balls on top. In the centre of the tower is a vane in the shape of a sailing ship, taken from St Mildred Poultry.

• The remains of the church were designated a Grade I listed building on 4 January 1950.